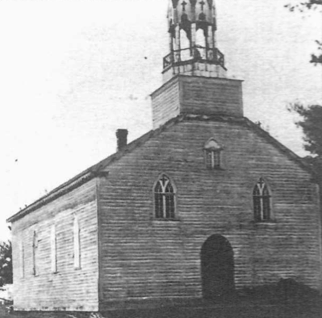 The annual social at St. John's Church, Osgoode, Ont., will be held Seturday, July 22. A home cooked supper will be served from 5 to 9 p.m. followed by dancing with the Trilites.

Church of the week

Before our modern, direct Prescott Highway, or Hwy. 16 was built, the Prescott Road was a continuation of Bank St., to about Greely, veering south-westerly past Osgoode. A section still known as the Old Prescott Road -- though unmarked -- runs south from the Town Line -- the road joining Manotick and Hwy. 31.

It is on this old Prescott Road, opened in 1844, that this week's St. John the Evangelist Roman Catholic Church may be found.

First built in 1855, the structure was of wood and was situated in the present cemetery.

In 1870-78, some records speak of a parish priest whose name was Aeneas McDonell Dawson, and of a post office "Dawson" -- the church then "St. John's of Dawson." When the present name was given, or what became of "Dawson" the place, isn't recorded.

Eventually a new church was needed and the blessing of the present building was Sept. 29, 1918. No mention is made of when the building was begun. It is known that the bell from the first church is still in service.

In 1930, on Nov. 11th, near disaster, when there was fire in the vestry and sanctuary. By Feb. 12, 1931, cleaning and repairs accomplished and blessing of the new area.

Fire destroyed the rectory next door on May 24, 1935. Now there's a covered walk-way joining the rectory and church.

Over the entrance is a carved stone depicting the Crest of St. John.

Inside the decor is of palest green on the walls and crescent arched ceiling, with arched beams slightly darker; the carpet area gold color.

Three chancel windows are stained glass picture; 17 side ones have insets -- partial figures -- of saints.

There's blond wood furnishings in the modernized chancel; blue ceramic tile candlesticks on the altar match a panel down the front.

A public address system was installed about 1965, and their old reed pump organ was electrified in 1973.

The church hall is across the road complete with kitchen, where wedding receptions are held. It's set in spacious grounds where they still have old fashioned parish socials on Saturday in July. Afternoon and evenings, pony rides for children, games, food and dancing, it's a real parish get-together.

Illumination of the cross

In Memoriam of Raymond and Margaret McEvoy

Have jointly contributed to the illumination of the cross on the dome of Saint John the Evangelist church, Enniskerry, Osgoode.

Social in aid of St. John's