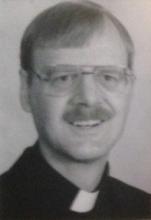 Father Terrence Sirosky was born in Renfrew and was ordained there in 1982. Much of his career has been spent in the Pembroke Diocese, including Arnprior and Eganville. In 1988- 1989, Father Terrence was pastor of St. Mary's in Ottawa, before moving to St. John's and St. Brigid's in August 1989. In 1991 he returned to Pembroke Diocese and was posted to St. Andrew's in Killaloe. Father Terrence's most recent assignment is at Our Lady of Mercy in Bancroft.